The Langdon Street Bridge was built in 1928, after the Flood of 1927, as part of the massive statewide effort to replace damaged and destroyed structures. The bridge is one of the standardized designs used during this reconstruction era which enabled a very efficient replacement process through mass production. It is generally known as a Warren type pony truss with curved top chords.

Correcting the Flawed Structure
The bridge has served the City well, but through the course of time, and demanding conditions including environmental and vehicle load impacts, this steel structure is currently structurally deficient and is no longer capable of supporting today's vehicle loads without rehabilitation or replacement. In fact, the condition of key structural components has deteriorated to an unsafe level, and in 1990 the City Council ordered the closure of the bridge. As an interim measure to re-open the crossing, reinforcing I-beams spanning the abutments were placed inside of the trusses to support the bridge deck. This supplemental support now carrying the majority of the deck load, occupies space formerly used for parking on the bridge. 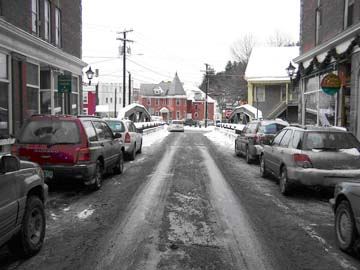 Vermont State Agency of Transportation Involvement
The City has been engaged in discussions with the State Agency of Transportation (VTrans) since the mid-1980s, and in 1988 we were successful in obtaining eligibility for State and federal funding assistance as part of the Town Highway Bridge Program. VTrans accepted responsibility for project development, including engineering and right-of-way services. Discussions ensued about rehabilitation and replacement options, and a number of alternatives were developed and considered.
Historic Structure
The Langdon Street bridge is listed as an historic structure located in an historic district as classified by the Vermont Division for Historic Preservation. Therefore, and quite appropriately, much of the design consideration focused on preservation to the extent feasible, thus assigning greater weight to this alternative. This aspect of the project development process is consistent with the community's expressed interest in the bridge and with State and federal law.

Beginning the Project
The Montpelier Planning office initially took a lead role in the project development process, holding meetings with the Langdon Street merchants. Also in 1996, the City received word that recent legislation had altered the City's local funding share requirement from 10% to 5% for projects that include rehabilitation instead of reconstruction. 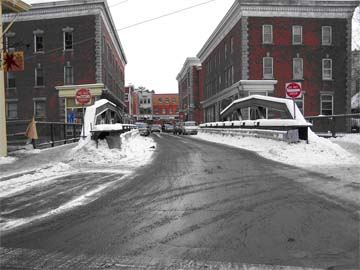