Thanks to the enormous generosity of the central Vermont community, Phoenix Fest raised over $17,000 in support of the businesses affected by the May fire in Montpelier. Everything from tents to porta-lets were donated, and hundreds of volunteer hours assured that the event ran smoothly. Last week, ORAC Executive Director Diane Manion distributed all the money directly to the 25 employees of Play It Again Sam, Head's Up, Charlie O's, and the Country Store to help defray their lost income. A huge thanks to everyone for making this such a success. 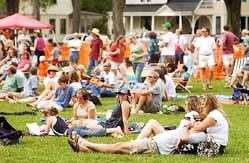 Rising to the Occasion
Excerpted from the June 11, 2003 Times-Argus "Talk of the Town" section

Hundreds of supporters turned out Sunday for the Phoenix Fest benefit at Vermont College for victims of the downtown fire that forced 4 businesses to close.

Under blue skies and bright sunshine, vendors set up around the green as The Lindner Brothers warmed things up with Bluegrass tunes.

Many who attended said it brought back memories of the former Midsummer Festival of music that used to grace the college's green. Vermont College, now a part of The Union Institute and University of Cincinnati, Ohio, donated the space.

The musical extravaganza included jazz, bluegrass, folk and rock music in an uninterrupted medley of sound that last nearly 8 hours.

"It just so far exceeds my wildest hopes," said Diane Manion of the Onion River Arts Council. "We raised over $15,000 and there's still money coming in."

The money will go to the employees of the 4 businesses affected by the May 24 fire: Heads Up hair and beauty salon, Play It Again Sam music store, the Country Store and Charlie O's bar.

Attendance swelled to over 500 at a given time. Offerings included barbecue, exotic Italian and French pizza, salads and Asian food.
Montpelier City Manager William Fraser, complete with Stetson hat, performed with Rusty Romance and the Rednecks. "The city manager's job is a bit like this," he joked. "You surround yourself with the best musicians you can find and then stay out the way."

A highlight of the event was the Play It Again Sam Band, made up of employees of the music store headed by owner Kevin Crossett, playing classic rock hits. "That was fun… it helps get the dust off the fingers," he said.

Crossett confirmed the business would begin to move into City Center this week, and he hopes to open on July 1. 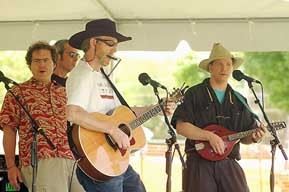 Country Store owner Heather Shouldice was also grateful for the show of support for the benefit. "We're very lucky to have Onion River Arts Council in Montpelier," she said. "This is really a prime example of why we live or work in Montpelier."

Heads Up owner Jean Lund was equally appreciative. "I think it's a very generous community we belong to," she said.
Coronavirus Updates
Agendas & Minutes
Welcome to Town
Online Payments
[]